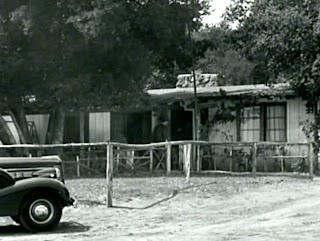 I've been collecting movies lensed in Chatsworth for well over a dozen years, and I'm continually finding new films with scenes shot on the Brandeis Ranch.  The busiest filming era on the Brandeis Ranch was 1935 to 1942, but a few films were shot even later.  The last movie filmed there was Treasure of the Ruby Hills (1955).

Three of the prominent features that help identify the ranch are the Western street (known as Hickeyville, see http://a-drifting-cowboy.blogspot.com/2012/06/brandeis-movie-ranch-hickeyville.html); the bunkhouse, and the caretaker's house seen in the screenshot above from a scene in Prairie Moon (1938).

The caretaker's house had a slight or low pitched roof, wood siding, and in early films had a rustic wood rail fence leading to the front door.  Upon closer examination you can see chicken-wire applied to the fencing to keep out pests.  Even the extravagant estate homes today have resorted to the use of tight meshed wire to keep out the large rattlesnake population in the area. 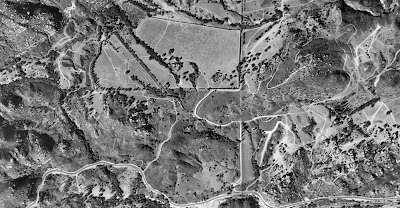 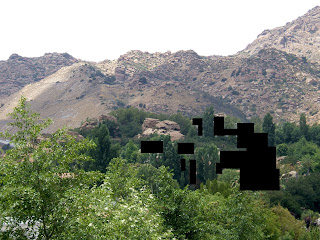 This redacted photo (taken in 2010) shows you what the area looks like today.  The Ronald Reagan freeway nows runs contiguous to and immediately south of the rock outcroppings that were next to the caretaker's house.

The screen capture above taken from a scene in Bill Elliott's The Last Bandit (1949) gives you a fairly good look at the rocks just south (left) of the caretaker's house.  Now, compare this screenshot with the redacted photo above. 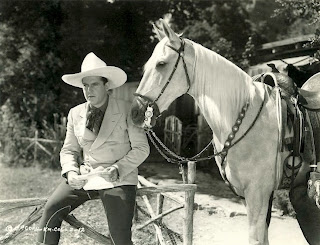 In this early movie still from Heir to Trouble (1935) Ken Maynard is sitting on the rustic fence (chicken-wire plain to see). 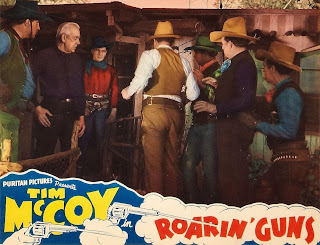 Here's another look at the rustic fence and entry to the caretaker's house in a lobby photo promoting Tim McCoy's Roarin' Guns (1936).

In a publicity photo from The Red Rope (1937) Bob Steele is sitting on the rustic railing.  The house is almost completely surrounded and partially covered with live oak trees that populate the ranch. 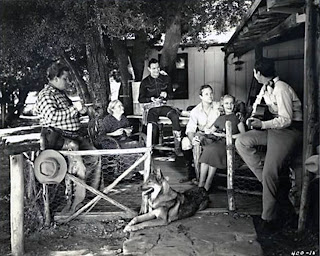 The screenshot above from Adventures of the Masked Phantom (1939) gives you a better look at the patio area in front of caretaker's house.

In this final shot from The Last Bandit (1949) you get a good look at the north elevation (right side of the house), but as you can see the patio and rustic railing are now missing.

To learn more about the ranch's history see my post at http://a-drifting-cowboy.blogspot.com/2012/01/cowboy-culture-six-degrees-of_23.html

As you know I've wrapped up my 'Meanwhile back at the ranch' posts about Iverson Ranch features, but there's still lots to share about other Chatsworth movie filming locations.  Stay tuned...