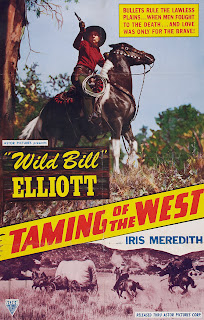 The Taming of the West (one of my favorite Bill Elliott films) is directed Norman Deming, and stars Bill Elliott, Iris Meredith and Dick Curtis. 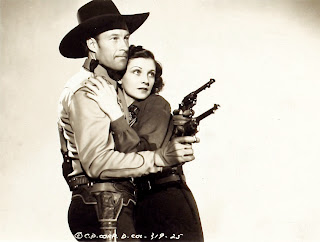 Marshal Bates of Prairie Port is shot to death by outlaw gambler Turkey when he tries to stop a saloon brawl.  Wild Bill Saunders, a peaceable newcomer in town pursues Turkey, and brings him back dead.

Watch Wild Bill in his pursuit of Turkey in the Garden of the Gods: http://www.youtube.com/watch?v=qxc5XvGz47g&feature=youtube_gdata_player 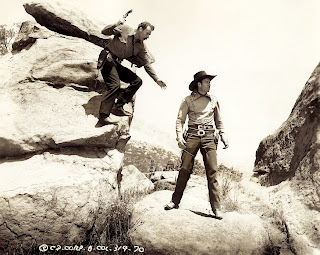 Outlaws Rawhide and Handy attempt to rob Mary Jenkins (Pepper's sister) as she is driving into town, her team runs away, and Bill and Pepper find her dead under the overturned wagon.

Bill arrests and jails Rawhide and Handy, but Carp Blaisdale, the town banker (secretly the outlaw leader) promises his henchmen he will intimidate the witnesses so they will refuse to testify.

Mrs. Gardner tells the court that her husband has been so badly beaten that he cannot testify.  Pepper follows Handy and other outlaws and sees them shoot another witness. 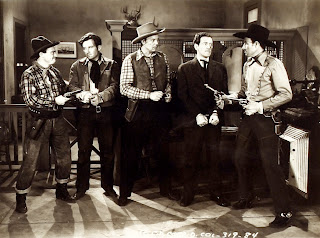 Wild Bill arrives in time to save Pepper from being killed. Bill now begins to suspect Blaisdale as the ring leader and sets a trap to capture him.

This is a first class B-Western with lots of action on the Iverson Ranch in Chatsworth.

Posted by Drifting Cowboy at 10:15 PM