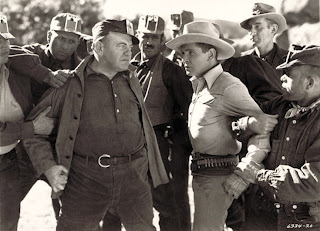 Dan Ward, the last of a well known outlaw family, returns to his hometown to marry his girl Molly, and prove he can go straight.  He meets Molly outside town, and while they are talking, Dan's name is called out by Ted Wells, a henchmen for Jim Swain -- Dan's long time enemy.

Dan beats Wells to the draw and kills him.  Molly disappears while Dan is examining Wells's body.  Now suspicious, Dan goes into town, and delivers the corpse to sheriff Larimer.  Sheriff Larimer stops Swain from picking a fight with Dan, and later explains to Dan that while he was away, Molly fell in love with Bert Gilmore, one of Swain's gang, so they plotted to ambush him.

Dan takes on a risky job for mine owner Pember.  Dan must get the $10,000 payroll through a narrow pass-- controlled by Swain's gang -- to Pember's mine.

Dan out wits and out shoots Swain's henchmen, and gets through to the mine.  When he delivers the payroll, Pember's daughter Betty sneaks off to go to town, despite Dan's warnings, and is captured by Gilmore.

A jealous Molly tells Dan about the kidnapping and leads him to Gilmore's hideout.  Molly shoots Gilmore, while Dan battles Swain.  In the end the miners join in and corral the rest of the outlaw gang.

Dan and Betty return to town.  Pember gives Dan -- who has proven he can be trusted -- a job and permission to marry his daughter.

For the Iverson Movie Ranch researcher this one of the better films.  There are excellent scenes lensed on the lower ranch gorge and Indian Hills.  Rock Stars featured include Devil's Doorway, Potato Rock, Crown Rock, the Grove, Sheep Flats, and Hole in the Wall.

See a clip from the Grove ambush...
http://www.youtube.com/watch?v=rTSvfcpuYv8&feature=relmfu

See a clip at 'The Wall' (Potato and Crown Rocks) and Devil's Doorway...
http://www.youtube.com/watch?v=pS-g3MK83wo

I highly recommend this topnotch B-Western.