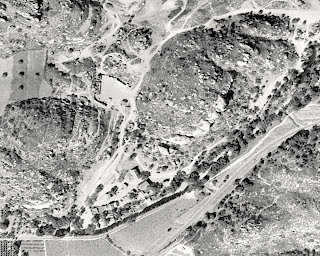 One of my favorite destinations as a child was a few miles west of Chatsworth: The beautiful rocky landscape of the Corriganville Movie Ranch in Simi Valley was the setting for hundreds of Western movies and TV shows filmed in the late 1930s through the ‘60s.

The property located alongside the Southern Pacific railroad tracks at the western end of the Santa Susana Pass that would eventually become the Corriganville Movie Ranch had been owned by a Los Angeles attorney named Jonathan R. Scott as early as the 1870s. 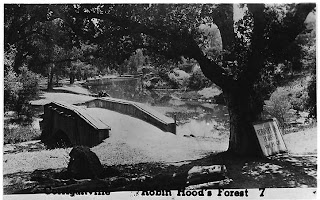 Soon after purchasing the property, Corrigan began the construction of insert roads and a barn. About 1943, the artificial Robin Hood Lake was added in an oak woodlands, which he had dubbed Robin Hood Forest. 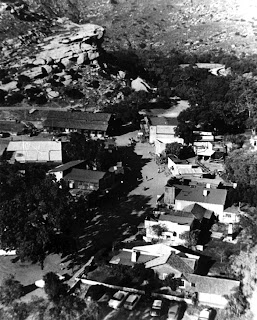 He also began constructing a western town known as Silvertown.  A side street in Silvertown was the location of a Mexican village often used by the Lone Ranger TV Show.  Outlaw shacks, dugouts, stage stops, and ranch houses soon dotted Corriganville's many canyons. 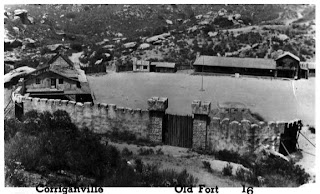 On a plateau above Silvertown during the summer of 1947, 20th Century-Fox built a western fort for the movie Fort Apache (1948). The fort later became the set for the TV series The Adventures of Rin Tin Tin.  The set was demolished in 1967.

Corrigan opened his western-themed amusement park to the public in 1947. The park featured stuntmen shows, movie lots, a working western town, stagecoach rides, pony rides, and a weekend rodeo. It even had a trading post, where you could purchase anything from postcards to cowboy hats. It attracted thousands of people on the weekends, including my family. 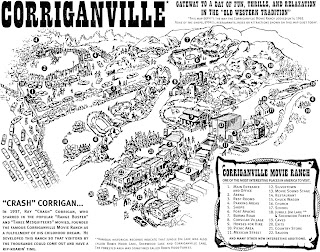 Corrigan employed several of his movie pals at the ranch, including Max Terhune and his famous dummy Elmer, and the actor known as Chief Thundercloud.

When the Simi Valley Freeway was built in the 1960s, it cut through the huge ranch, just as it had done to the smaller Iverson Ranch.  In 1965, Corriganville became “Hopetown” when it was purchased by Bob Hope for several million dollars.  Hopetown was closed to the public in 1970.  That same year, a wind-swept wildfire destroyed the majority of the Silvertown sets.  In November 1979, an arson-set fire destroyed the remaining Silvertown sets. All that exists today are a few concrete pads and foundations.

In 1988, 200+ acres of land comprising the main working areas of the original Corriganville Ranch were purchased by the City of Simi Valley for use as a regional park.

Posted by Drifting Cowboy at 6:43 AM