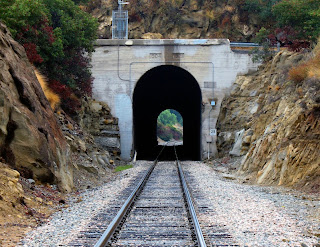 The photo above shows the west side of tunnel 28 (sometime after 1921) with Old Santa Susana Pass Road going over the top. 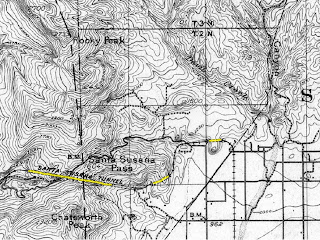 Chatsworth has three train tunnels that were contracted by the Southern Pacific Railroad, and completed in 1904.  The 1903 topographical map above shows the three tunnel locations (highlighted in yellow).  The tunnel furthest east runs under Topanga Canyon Boulevard today and is designated as 'Tunnel 28.' 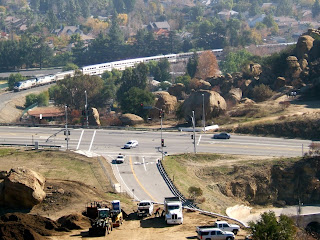 Tunnel 28 is the most recognized for two reasons.  First, it was the location of the tragic September 12, 2008 head-on train collision between a Union Pacific freight train and a Metrolink commuter train that resulted in 25 deaths and 135 injuries. 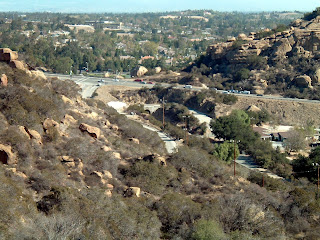 Second, it is the most filmed tunnel in Chatsworth and has appeared in dozens of movies.

The screenshot above from The Power and the Glory (1933) shows Spencer Tracy hiking out the west end. 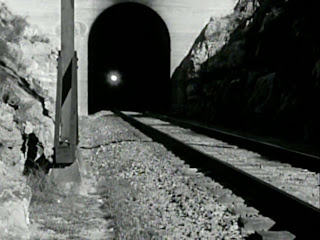 Here's a look (above) of the east side of tunnel 28 just before bad guys blow it up in Gene Autry's Rancho Grande (1940). 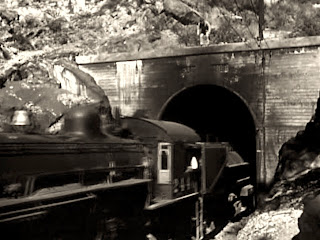 The photo above shows James Cagney's stunt double about to leap onto a train exiting the east side of tunnel 28 in a scene from White Heat (1949). 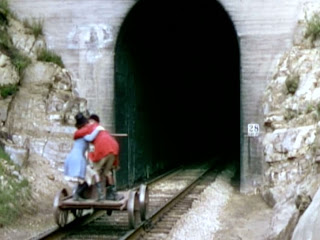 The screen capture above is from a scene in Fancy Pants 1950 shows Bob Hope and Lucille Ball on a railroad hand car entering the west side of tunnel 28. 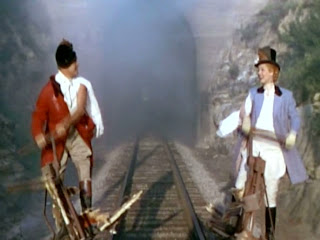 The screen capture above also from Fancy Pants 1950 shows Bob Hope and Lucille Ball on a split railroad hand car exiting the east side of tunnel 28 after being hit by a train :-) 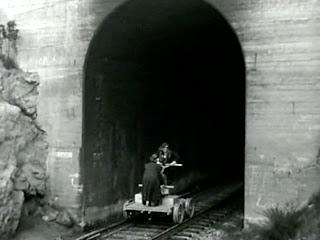 Above is a screen capture showing Marjorie Main and Barbara Brown on a railroad hand car entering the east side of tunnel 28 in a scene from Ma & Pa Kettle on the Farm (1951).

In another post I'll discuss tunnels 27 and the Santa Susana Tunnel 26 (at one time the longest tunnel in California).

Posted by Drifting Cowboy at 6:57 AM