As far as I know my granddad did not serve in the military during WWI.  I believe he was in Montana from 1910 to 1918, then he returned to Kendrick, Idaho where his father lived.  He married my grandmother in Kalispell in 1912. 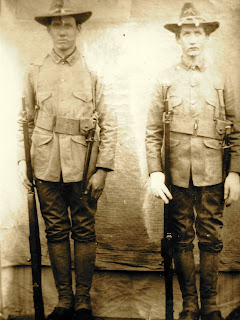 I do have a WWI Draft Registration record for September 1918, and I have this photo (above) of him and his brother in uniform.  The photo clearly shows what are probably letters for the collar insignia, but not the round disc with the "US" one would expect to see on a US Army uniform.

Mom always said granddad was part of the 'Montana Militia,' but I can't find any record for a Montana Militia during WWI.  Could he have been in The National Guard of some other reserve organization?

Any help identifying the uniform and or organization would be greatly appreciated.

Posted by Drifting Cowboy at 8:54 PM