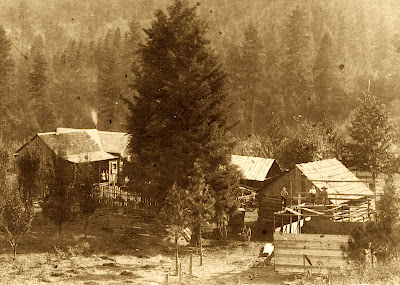 The photo above is of Abraham Lincoln Brown's Creston, Montana homestead around 1915.  If you look closely you'll notice his barn (lower right corner) is still under construction.  I love this old photo because it shows the house, shed, wagon and buggy.
Abraham Lincoln Brown (Abe), the son of John Galloway Brown and Lucy (Pinnsoneau) Brown, was born in Philadelphia, New York November 25, 1864. and died August 8,1948, in Creston, Montana.  He married Neva Genevive Plympton in Roswell, South Dakota March 1,1888. Neva was born in Zanesville, Ohio June 2, 1870. She was the daughter of Charles Henry Plympton and Nancy Ellis. Neva died April 8, 1939 in Creston, Montana.  Abe died there August 8,1948. 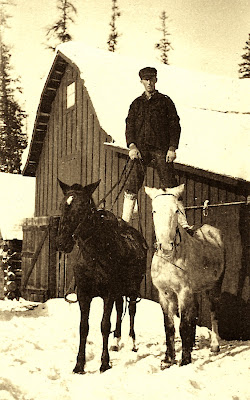 In this 1920s photo taken in front of his dad's barn in Creston, Montana,  Lon Brown is showing off his horsemanship.
Alonzo "Lon" Brown, son of Abe Brown and Neva (Plympton) Brown, was born in Adams, New York, March 16, 1898, shortly before his family moved to Montana.  He married Flavia Olive Brown in Alberta, Canada, December 9,1931.  Flavia was born in Montford, Montana August 3, 1913.   Alonzo died April 2,1980, in Kalispell, Montana.  He was my idol when I was a boy.  He and Aunt Olive introduced me to horses in 1950. 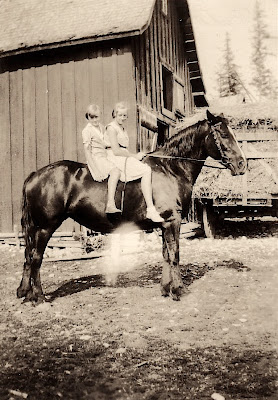 In this 1928 photo my mom and her little sister are riding Grandpa Brown's horse posing in front of his barn.  I like the wagon full of hay behind them.
Posted by Drifting Cowboy at 1:38 PM