I've been told there's difference between whittlin' and wood carving.  A whittler -- they say -- uses a pocket knife while the more refined wood carver uses a variety of wood working tools including an assortment of knives, chisels, gouges, mallets and (gasp) power carving tools.

I suspect the stereotypical ol' timer sittin' on a cracker barrel next to a pile of shavings was a whittler.

Over the years there have been some mighty fine cowboy artists who have turned-out whimsical, colorful, and humorous carvings. 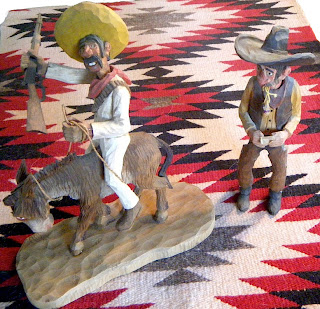 Last year I sold a collection of carvings created by a carver named Bud Odell.  The collection was pretty pricey (even after I discounted it 20%) -- and still the dinero from that sale bought hay for my horses for several months.  Bud Odell was the stepson of Andy Anderson (who taught him his craft) and Andy Anderson was -- arguably -- the most famous cowboy wood carver ever.  Andy carved whimsical characters for the likes of Franklin Delano Roosevelt and Dwight David "Ike" Eisenhower in the 1940s and 1950s. 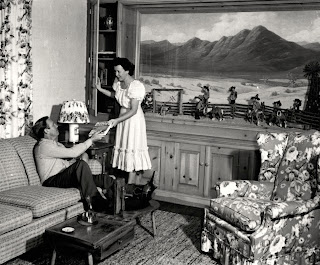 Even cowboy star Gene Autry was a fan of Andy's -- as you can see by the photo above taken in his home about 1949 (photo courtesy of Bruce Hickey). Fortunately -- for most of us -- the owners of High Noon photographed the collection and published a marvelous book (above) of Andy's work available on their website at http://www.highnoon.com/hnbooks.htm  I have one, and I can tell you it has wonderful examples of Andy's best work.  The color photos are outstanding, and the book itself is a work of art. 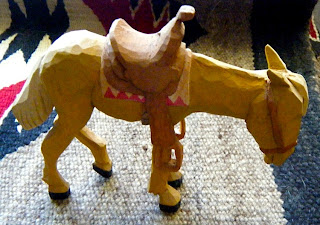 Andy's work inspired generations of wood carvers including yours truly.  The photo above was my attempt to carve my old palomino horse 'Sunup.' 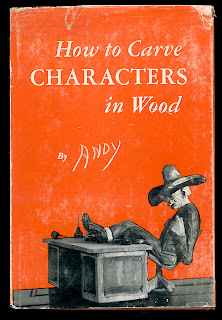 I used Andy's -- scarce and very collectible -- book "How to Carve Characters in Wood" as a guide to carve 'Sunup.'

In the early 1990s I took some carving lessons from another talented artist named Barry Lysaght (aka the Topanga woodcarver), but I've lost contact with him in resent years.  I learned a lot from Barry, and as a result I added relief carvings to many pieces of the furniture I crafted between 1989 and 2002. 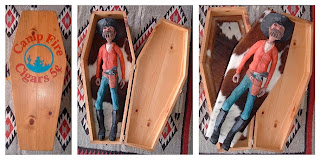 I even carved a humorous cigar humidor in the shape of a coffin.  Cigars in a secret compartment share the coffin with 'Ol' Pete' -- a cowboy who had partaken of one too many stogies.  I figured it took guts to keep your cigars in a coffin shaped humidor :)

I don't carve anymore because it takes strong hands and good eyes -- neither of which I have any longer.

In an earlier posts I told you about my carvings in…

The inspiration behind my first wood carving (Indians in a canoe) http://a-drifting-cowboy.blogspot.com/2011/12/if-you-cant-buy-museums-treasure-make.html

Posted by Drifting Cowboy at 7:21 AM