Margaret Wilkie (far left in the 1902 photo above) was born March 29, 1826, in St. John's, Newfoundland.  Others in the photo include her daughter Maria Head-Cummin, grandson Thomas Cummin (Maria's son), and Winifred Elizabeth Cummin (Margaret's great granddaughter).  I love these four generations photos.

Margaret Wilkie was the daughter of Thomas Wilkie, who married Jane Kent in 1808, at St Botolph, Bishopsgate, London. 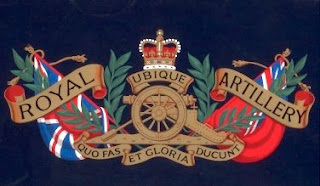 Thomas Wilkie was in the Royal Artillery which had been deployed in Newfoundland before 1812 until after 1826.  He was the Armory Sergeant at the fort on Signal Hill in St. Johns.

An unknown London newspaper reveals "Margaret Wilkie died on 5 Sep 1910 in the Infirmary, aged 84.  Her funeral took place on 10 Sep 1910 in Plumstead Churchyard.  Mourners at her funeral were her eldest son and his wife, Stephen John Head and Susannah Avery Head, her daughters and sons-in-law Margaret and George Morris, Fanny Pope, Emma and George Brown, Annie and Walter Barling and Alice and Will French.  Latterly, Margaret had been living at 32 Ennis Road, Plumstead, until her deterioration and committal to the Infirmary."

The Kentish Independent Newspaper published an account of the funeral, which was more like an obituary. Margaret was greatly loved and respected in the locality.

"The funeral took place on September 10th at Plumstead Churchyard, of Mrs. Margaret Head, widow of the late Mr. Stephen Head, (at one time a foreman at Woolwich Dockyard) who died aged 84 years. The deceased, who was a well known resident of Plumstead, had been ailing for some considerable time.
"She was born at the Fort of Signal Hill, Newfoundland, in 1826, her father being the Armourer-Sergeant at the Fort. She is believed to be the first English child at the Fort, and almost to the last was happy telling anecdotes of what took place at the Fort. She was taken, as a child, to England and returned to Newfoundland in the old sailing ship days (there were no steamers in those times) when ships often had to be battened down because of storms. Her husband (who predeceased her in 1881) was a man well-known and respected in his time: he was born on Plumstead common in the old house that adjoins St. Margaret's Church, he and his father before him being gardeners to the owners of Vicarage Park, which , at one time, extended for some distance round about.

"The wreaths were numerous and beautiful, among them being tributes from: 'Stephen and family', 'Margaret and George' 'Fanny and children', 'Annie and Walter and son', 'Matthew and Ester', 'Alice and Will', 'Eva and Dot'.

The funeral was conducted by Messrs. Messent & Sons."