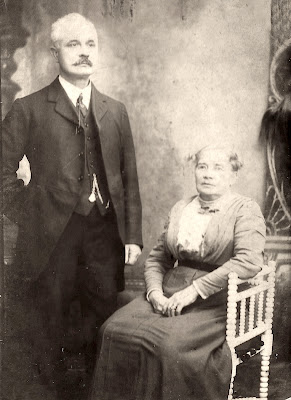 Stephen John Head, my dad's grandfather (in the photo above) retired from the Royal Carriage Department (RCD) of the Royal Arsenal in Woolwich, England in 1917.  According to his gold retirement watch, he had been employed there for 42 years (1875 - 1917) and had been promoted to the assistant foreman of the RCD.  That may not sound like a big deal until you learn how large the department was. 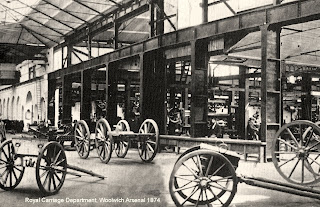 The Woolwich Arsenal was an armaments-manufacturing facility on the south bank of the River Thames in Woolwich in Southeast London.  The RCD manufactured gun carriages and limbers (pictured above) for artillery pieces. 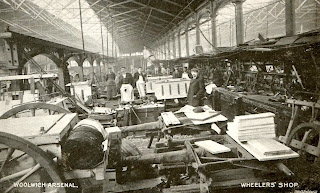 The following is from a museum display and describes the work that took place in the Royal Carriage Department:

"These carriages were built of wood with iron fittings and their manufacture required the skills of wheelwrights, carpenters, and blacksmiths.  From the 17th century, the Board of Ordnance in England employed a master carpenter to oversee their manufacture in government workshops or by private contractors, but by the early 19th century, the Royal Carriage Department had been established at Woolwich to centralize design and manufacture.

"Wooden gun carriages combined various materials in a careful blend of lightness and strength.  They needed to be light enough to have the mobility expected of them and strong enough to carry the weight of the gun, withstand the strains of firing and survive traveling over rough ground.  Their building, therefore, required great care.

"The wheels were, perhaps, the most vital parts.  The spokes and felloes all have to be of exact size so that when fitted together the wheel is truly circular with the hub at its center.  The iron tyre has to be the correct tight fit on the wheel.  The pipe boxes (conical inserts in the hub) have to fit the tapered arms on the axletree.  These details made a strong and serviceable wheel.

"Whether it was a gun carriage or a simple barrow for moving projectiles which was being built, the work in the Royal Carriage Department was carried out to the highest standards.  Only after ensuring that these standards had been achieved was the product accepted as fit for service." 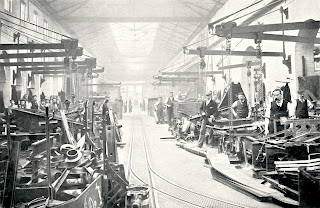 At its peak, during World War I, the Royal Arsenal extended over some 1300 acres and employed around 80,000 people.

You can learn more about the Arsenal during WWI here: https://www.youtube.com/watch?v=lyr03UxU87s 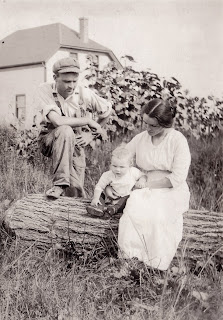 Stephen William Head, my granddad, had apprenticed as a joiner before he emigrated to the United States in 1910.

He quickly found work as a carpenter in Detroit, Michigan, and by the early 1920s he was a successful home builder.

From Wikipedia: A joiner differs from a carpenter in that joiners cut and fit joints in wood that do not use nails.[citation needed] Joiners usually work in a workshop since the formation of various joints generally requires non-portable machinery. A carpenter normally works on site. Cabinet makers who specialize in manufacturing furniture are regarded as producing fine joinery.


My dad learned his carpentry skills from his father, and in turn passed them on to me.  Dad was a California licensed general building contractor from 1947 until he retired over forty years later.  I worked as his apprentice during most school vacations--except for the summer I tried being a cowboy. 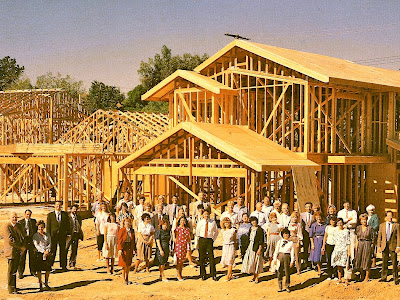 I began working in the home building industry in 1965, and still do consulting as a construction manager.  I have also been a California licensed general contractor since 1973.  In this 1989 photo above of Glenfed Development Corporation's "team" I'm second from the left.  When I left Glenfed in the early 1990s I was its senior vice-president and manager of the home building company.  Truth be told I was always happier working as a carpenter than I was as a manager, but I had the overall knowledge of home building that made me an asset to a developer.

So you can see I also came by my joinery and woodworking skills through another family legacy.

I should also explain that there's been a lot of overlap in my career.  While I was still employed by Glenfed I knew the end was coming, so I started my artist career on a part-time basis.  I still continue to work part-time as a home building consultant and construction manager.