Loons and other icons of the northwoods 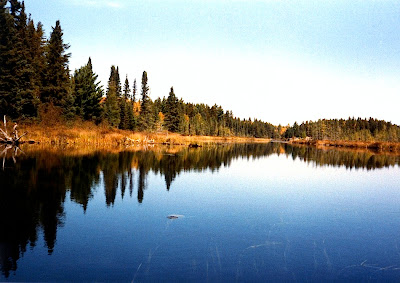 As a native of the state of California there are several things I never experienced until my first trip to the northwoods.  During that trip to Canada I encountered birds called common loons.  Loons fascinated me with their behavior and extraordinarily beautiful call.  A  canoe trip in Ontario gave me the opportunity to study them for a few days.  I discovered only a single pair of loons inhabit most smaller lakes or ponds.  Their call has been described by poets as weird, sad, wild, howling, laughter.
American poet philosopher Henry David Thoreau wrote, "In the middle of the night, as indeed each time that we lay on the shore of a lake, we heard the voice of the loon, loud and distinct, from far over the lake. It is a very wild sound, quite in keeping with the place and the circumstances of the traveler, and very unlike the voice of a bird. I could lie awake for hours listening to it, it is so thrilling."
In his journal he wrote, "This is of the loon—I do not mean its laugh, but its looning,—is a long-drawn call, as it were, sometimes singularly human to my ear,—hoo-hoo-ooooo, like the hallooing of a man on a very high key, having thrown his voice into his head." 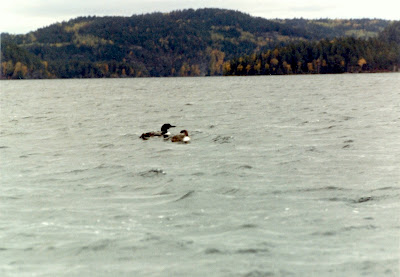 In my own experience I would hear a nearby loon call, then somewhere in the opposite direction--at the far end of a lake--its mate would answer.  Loons feed off fish, amphibians, and crustaceans, and are wonderful underwater swimmers.  It was great fun to watch them dive, swim a great distance, and then resurface on the opposite side of your canoe. 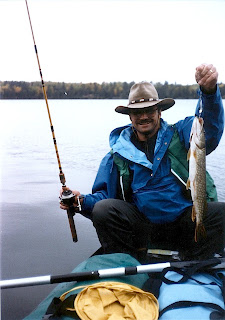 Another thing you aren't likely to find in California is a fish called the Northern Pike or "Jackfish," as they are known in Canada.  They are considered a sporting fish because they are wonderful fun to catch and play--they are determined fighters that won't quit easily.  I caught and released several pike on my trip to Algonquin Park, and I discovered that they readily hit a "Needlefish" lure or similar spoon when trolled behind a paddled canoe. 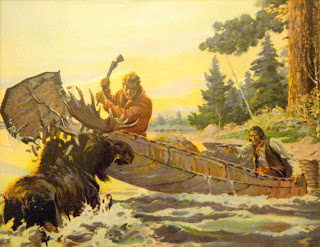 While not strictly limited to the northwoods, I've always associated the moose with this area.  The majestic moose has been the subject of a great many artists who are considered northwoods painters.  Artists like Philip Goodwin, Carl Rungius, Winslow Homer, and Arnold Friberg who illustrated sporting magazine covers and calendars often included a bull moose and sometimes painted them showing an encounter with a canoeist.  I recall being awaken one night in Minnesota by a thrashing sound in the willows not far from my tent.  In the morning I found moose tracks not more than five feet away.

Posted by Drifting Cowboy at 5:57 PM