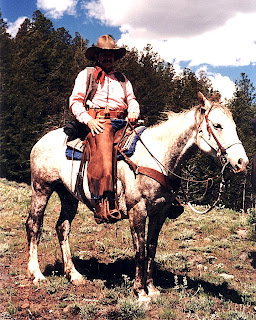 During all the years I participated in the Old West Show and the Western Design Conference in Cody, Wyoming, I was very fortunate to have made some good friends and to have been invited on some great trail rides. 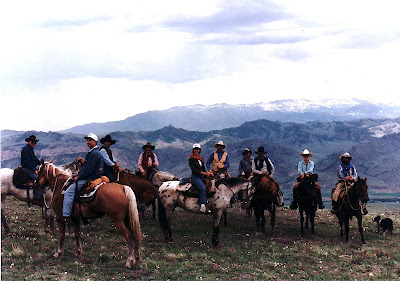 The photo above is a small group of cowboy antique dealers who were treated to a super ride organized by Brian Lebel (third from right).  The outfitter that provided the horses was a gent named Bob DeRoche.
Others in the photo are (left to right) unknown, Joseph Sherwood, Dave Jeffers, Jerry England, Linda Kohn, Bob DeRoche, unknown, Brian Lebel, Mary Schmitt, Jeff McManus and Katie (Jeff's border collie).


I got to know Bob DeRoche pretty well.  He gave me a border collie mix pup in 1996--I named him Billy--and sixteen years later he's still a big part of my family.
Linda Kohn and Joseph Sherwood are the owners of High Noon in Los Angeles, and the organizers of a wonderful antique show and auction that has taken place in the Phoenix, Arizona area for more than twenty years.  Mary Schmitt is the owner of Cayuse Americana in Jackson, Wyoming.  Jeff McManus was a Wyoming brand inspector and sometimes outfitter.  Bob DeRoche owns High Mountain Outfitters and at one time also owned Cedar Mountain Trail Rides in Cody.

The photo above was taken in 1996 by Willam Manns photographer and owner of Zon International Publishing, Santa Fe, New Mexico.  I'm not sure who all was there, but they were all dealers in Brian Lebel's Cody Old West Show.  You can bet everyone had a great time.  Yee Haw! 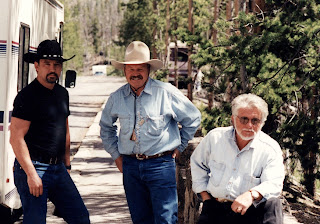 In 1999 a bunch of my friends in Los Angeles decided they wanted to see the beautiful Wyoming trails I had been braggin' about, so they asked me to arrange a ride.  I called my old friend Bob DeRoche and fixed a date in late June. 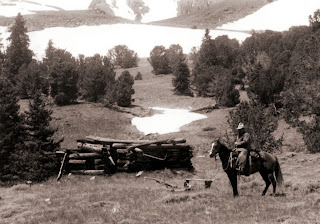 Bob took us to Kirwin, a ghost town on the Wood River near Meeteetse, Wyoming.  My buddies all owned horses and were good riders, or Bob won't have taken us to Kirwin which sits at 9000 feet. 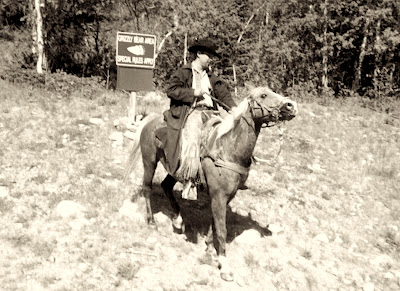 The 26-mile ride took us through grizzly bear country, above the timberline on scree slopes, across snow banks (where the horses slid downhill); and we criss-crossed the Wood River dozens of times. 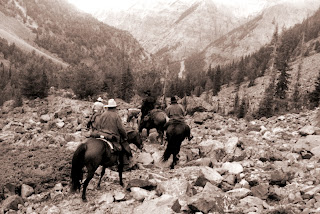 We kept company with the local elk and moose population.   Much to everyone's satisfaction, we didn't encounter any bears.

The high point of the Kirwin ride was at an elevation 12,000 feet--pun intended :-)
Posted by Drifting Cowboy at 7:39 PM