Dad wasn't a cowboy.  He didn't come from a family with a Western heritage.  If fact, his father emigrated from England in 1910, and his mother emigrated from Canada about the same time.  I'm pretty sure the first time he ever rode a horse was at mom's uncle's place in Montana in 1950.  Nevertheless he took to horses in a big way, and before long we had horses in our backyard.

Dad was a home builder, so he made a pretty fair living, but he always had "itchy feet," and couldn't stay in any one place too long.  For that reason, in 1957 we moved to the little hamlet of Oakhurst in the High Sierra Mountains. 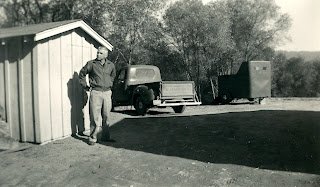 One thing about dad was that he could build almost anything.  A couple of years before we moved to Oakhurst he had built his own horse trailer (photo above).  That trailer wasn't fancy, but it sure got the job done.  By the time he moved us to Oakhurst--actually we made a brief 60-day stop in Ahwahnee eight miles from Oakhurst--he had gotten rid of all the horses, but mine.  I wonder if he ever regretted that decision because there were some great trails right out of our back door in Oakhurst. 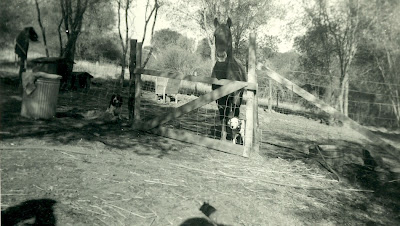 In less than two months, dad had built a two-bedroom house, a pump house, a hay shed, and a small corral .  He never got around to building a barn because by 1960 he had itchy feet again.  Poor ol' Sandy--my red dun quarterhorse--had to learn to deal with the elements--rain and snow. 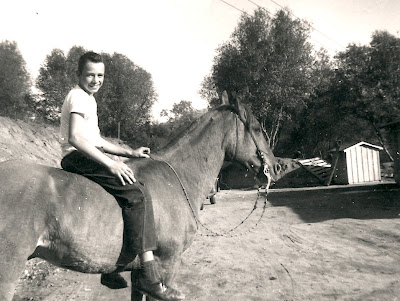 I loved living in the mountains.  I could fish for trout and swim in the Fresno River not 300 yards from our front door.  I could hunt deer and quail in our backyard, and I could ride Sandy for miles without seeing anyone. 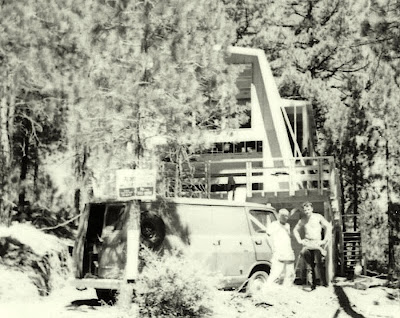 It's funny how things work out because a decade later dad was working for me when I was framing vacation cabins in Big Bear Lake, California.  That summer I traded a table saw for an old horse with free pasture.  Sadly I had to give up that horse when winter came, and the weather forced me to move back to Los Angeles.  It took another twenty years before I owned another horse.

Posted by Drifting Cowboy at 10:31 PM