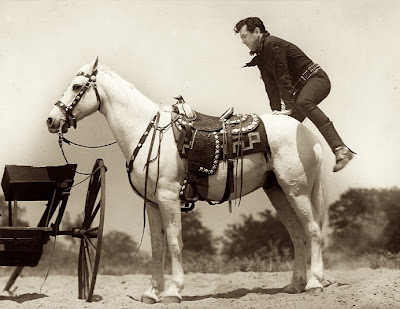 Six-gun heroes who did exciting horse tricks were always a big hit with me.  I especially loved to watch some of the extraordinary running mounts Hollywood cowboys had perfected.  I figured anyone who could do a running mount, like Johnny Mack Brown in the photo above, was a sure enough top hand.  As soon as I was big enough, I started practicing on ol' Sandy, my red dun quarterhorse.  We got pretty good at workin' together.  I'd give him a whistle so he'd know I was coming, and with about 30 feet of running space I could vault on his back with ease.
By the time I got into high school I discovered all those running mounts had actually been pretty good training for the high jump, so I joined the track team.  During my senior year I set both the El Camino High school and Sacramento Metropolitan League high jump record with a leap of  6' 4".
Years later (1975) when I was coaching a children's track team,  my wife learned about a Masters (over 30-year-olds) track meet called the "Grandfather Games."  I hadn't competed in track since I had been in the army more than a decade earlier, but the idea of high jumping and pole vaulting once again appealed to me.
My wife, who was teaching high school English, introduced me to one of her students that was her school's best pole vaulter.  He invited me to work out with him after school.  I had never tried a fiberglass pole--back when I was in school I started with a bamboo pole and eventually got to use a steel pole.  Our workouts went pretty well, so I joined the Southern California Striders Masters Track and Field team and signed up for the Grandfather Games.
Masters track is broken into different age groups.  The year earlier the winning jump for my division had been 6' 8".  I forged ahead with a goal of winning third place, hoping I could make a jump of 5' 8" as I had done in practice.
Funny thing the fellow who won the year before didn't show up, so I won my division with a jump of 5' 10".
The best part about competing in masters track that year was the unbelievable--but true--bragging rights I earned.  I actually competed in the same track meet with Bob Richards, the "Vaulting Vicar," who was the second man to pole vault 15 feet, and is the only two-time Olympic gold medal winner in the pole vault (1952 and 1956); Parry O'Brien, two-time Olympic gold medal shot put winner (1952) and (1956).  He was the first person to put the 16-pound shot more than 60 feet; and John Carlos, 200 meters Olympic bronze metal winner (1968).  He  became famous (or infamous) for his Black Power salute on the award stand in Mexico City.
I wonder if there's a division for old cowboys with an artificial hip?
Posted by Drifting Cowboy at 10:14 AM