How can you tell if a fisherman is lying?

Acorns on a stump
I was fishing on a river bank one day when I happened to notice a bunch of acorns on a tree stump near me.  The stump was about eight feet out from the bank.
A few minutes later, I saw a squirrel chattering on the bank opposite that stump.  Then suddenly I saw him back off and take a running leap at the stump.
While the squirrel was in mid-air, a huge trout leaped out of the water and grabbed him.
But the strangest thing was a few minutes later that same trout put a couple more acorns on that stump.
Frogs for bait
Joe and I were canoe fishing for bass one day.  We were using frogs for bait, and the fishing had been fantastic.
When Joe used the last frog I suggested we paddle to shore, so I could find some more frogs.
I searched high and low and couldn't find any frogs, so I started back to the canoe.  Then I spotted this little black snake with a frog in his mouth.  I quickly grabbed that snake and wrestled the frog from his month.
As I was leaving I looked down and noticed the horribly dejected look on that snakes face.  I felt terrible, so I took out my hip flask and poured a shot of whiskey down the black snakes throat.
The strangest thing was a few minutes later--back in the canoe--I felt a tapping on my knee.  I looked down and there was that same black snake with another frog. 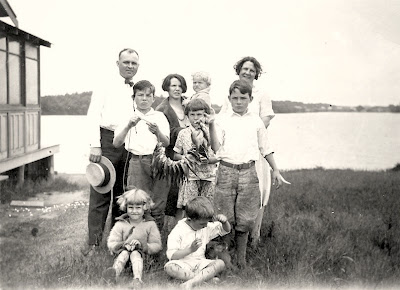 My dad (center row, far right) developed his love for fishing when he was growing up in Michigan during the 1920s. 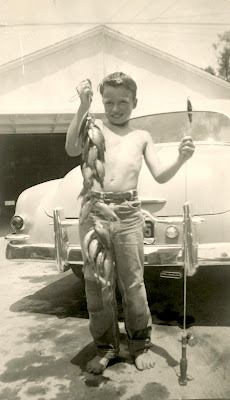 Thirty years later dad introduced me to fishing at Lake Sherwood in Southern California.  In the 1952 photo above, I'm holding dad's steel fishing rod with a bait casting reel, and a jointed bass plug.  I remember the reel he gave me to use was an old fly reel, so his outfit must have been a prop for the photo. 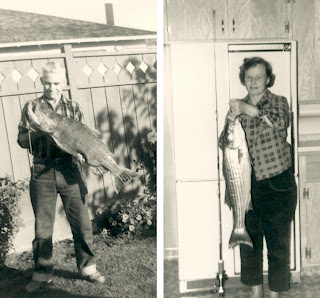 In their later years mom and dad lived in Sacramento, California, where they fished both the American and Sacramento rivers.   Mom was sure tickled with the striped bass (in the photo above) it was her biggest fish ever.
To tell if a fisherman is lying--check his lips.  If they're moving, chances are he's lying.
Posted by Drifting Cowboy at 10:22 PM