Meanwhile back at the ranch -- Garden of the Gods

All of my meanwhile-back-at-the-ranch blogs are stories about movie location ranches that once existed in Chatsworth, California, my hometown.

An introduction to my books about Chatsworth filming locations can be found at http://www.cowboyup.com/ 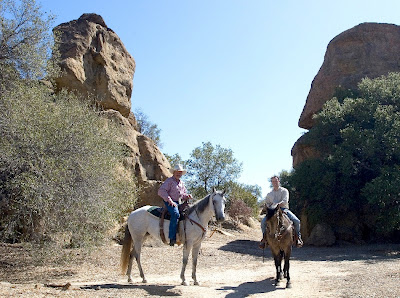 Some researchers might argue that the most famous rocks on the Iverson Movie Ranch were the formations collectively known as Garden of the Gods.

The photo above was taken in the Garden of the Gods during the filming of a ReelzChannel Dailies show titled "Hollywood was Here -- The Iverson Ranch" (produced by Chris Meagher and filmed Tracy Birdsell).

Scott Conley, actor and host of the episode, is sitting on my horse Cash (right) and I'm on Kasidy (left).  Perhaps we are the last two horseback cowboys ever to be filmed on the Iverson Movie Ranch.

The rock pinnacle on the left is known as Indianhead rock; the one on the right, Sphinx rock. 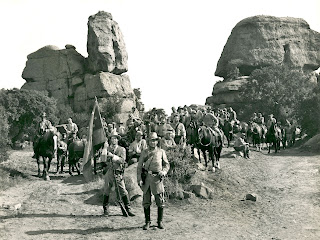 The movie still above is from a scene in The Man from Colorado (1948), starring Glen Ford and William Holden.  When you compare the two photos of the same location, you can see how much the trees have grown; today they nearly obscure the view of Indianhead rock. 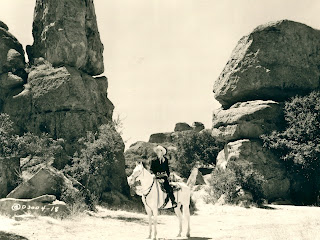 This photo taken in the Garden of the God (above) is a Columbia publicity still of Charles Starrett on his horse Raider. 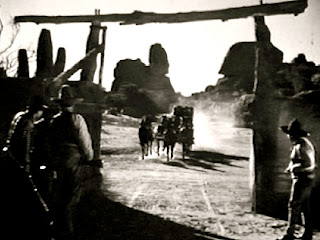 One of the most dramatic film uses of Garden of the Gods (screenshot above) was in John Ford's classic Western Stagecoach (1939), starring John Wayne. 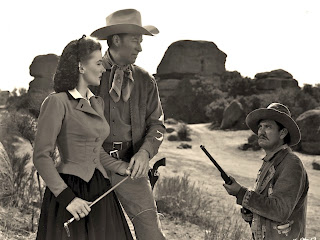 The movie still above is a scene from Old Los Angeles (1948), starring Bill Elliott, John Carroll and Catherine McLeod. 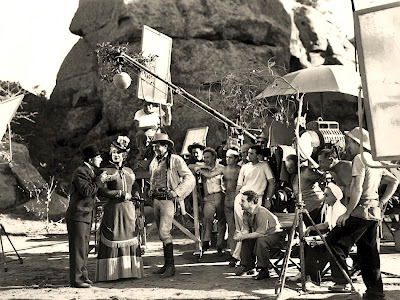 One of the most interesting stills in my collection is from Shut My Big Mouth (1942), starring Joe E. Brown, Adele Mara and Victor Jory (above).  The photo was taken in front of the Sphinx rock pinnacle.  I think it is great fun to see the film crew and their equipment on the set in the Garden of the Gods. 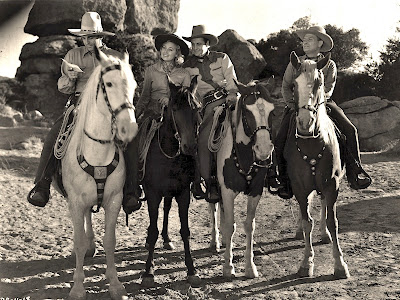 Some (but not all) of the films with scenes in the Garden of the Gods include:

The Garden of the Gods also showed up in many TV shows including scenes in "Have Gun - Will Travel," "Bonanza," "Hopalong Cassidy TV Show," "Lone Ranger TV Show," and Disney's "Zorro."


To learn more about my research, and the books I've written about the Iverson Movie Location Ranch, and other Chatsworth, California filming locations see http://www.cowboyup.com/

Posted by Drifting Cowboy at 11:44 AM