Many years ago when I was still working long hours as a construction manager in the corporate world, I needed a diversion to clear the cobwebs from my mind.  What would be better than a trip to the northwoods?
But, alas I had no means of getting there, so I settled for a vicarious adventures with writers of Northwesterns.  What are Northwesterns you ask?  They are action packed adventures--like a good Western--except the setting is the "Northwoods" rather than the "West."  The characters are voyageurs, Native Americans, fur traders, and mounties, along with the same typical outlaw rascals you'd expect to find in a Western.


In a Northwestern, the canoe replaces the horse; the dog team, the buckboard; and the fur trader's daughter replaces the rancher's daughter.
My list of Northwesterns authors includes George T Marsh, James B Hendryx, James Oliver Curwood, and Lawrence Mott.  In today's computer world you can actually download and read some of these wonderful novels for free on Google Books.
My favorite writer (from the list above) is George T. Marsh.  Here's a list of his books:
Toilers of the Trails (1921) free on Google Books
The Whelps of the Wolf (1923) free on Google Books
The Valley of Voices (1924)
Men Marooned (1925)
Flash the Lead Dog (1927)
Under Frozen Stars (1928)
Sled Trails and White Waters (1929)
The heart of the king-dog (1929)
Vanished Men (1931)
The River of Skulls (1936)
White Silence (1938)
The following poem--penned by George Marsh--appeared in Outing magazine (1910). 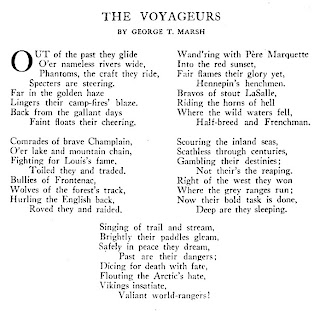