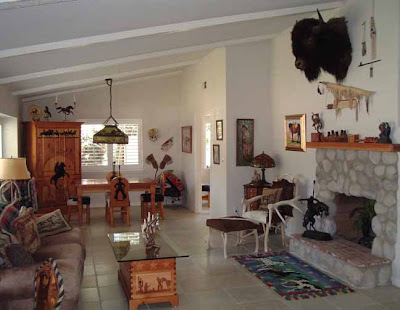 Although I didn't know it at the time, 1989 was a year of crossroads for me.  I had been employed by a major California-based savings bank for quite a few years.  I had worked my way up to a senior vice-president position and was managing the operations of its home building subsidiary.  At that time the feds were forcing banks out of the home-building business, so my employer was in the process of trying to liquidate $400 million in assets.  For me it was a stressful time because my assignment was to complete 600 homes under construction, wind-down operations, and systematically layoff more than 150 employees.  For many years my hobby had been collecting and trading cowboy antiques.  In 1988, I learned about a major antique show and auction that would take place in Cody, Wyoming during the summer of 1989, so I signed on as a dealer.
While I was in Cody that summer I visited the Buffalo Bill Historical Center and was treated to an exhibit titled "Interior West: The Craft & Style of Thomas Molesworth."  I was completely captivated by Molesworth's whimsical Western-themed furniture.  Thomas C. Molesworth (1890–1977) was an American furniture designer who was a significant figure in the creation of a distinctly Western style of furniture and accessories, utilizing hides, horn (antler) and natural wood. Molesworth's style drew from the Arts and Crafts Movement and from vernacular design characteristics of Western American ranches and farms. He is credited with popularizing the "cowboy furniture" style. To produce his designs, Molesworth operated the Shoshone Furniture Company from 1931 to 1961 in Cody, Wyoming.
After seeing the Molesworth exhibit I couldn't wait to get home to try my hand at crafting my own cowboy furniture.  I started with a headboard and bench for our guest bedroom--which my wife had dubbed 'the shrine' because it was where a large part of my cowboy antiques hung on the walls.  Knowing my job with the bank would end when the last employee was laid-off, I needed to start planning my future, but I had a contract with the bank that guaranteed me a substantial severance payment if I stayed to the end.  Leaving early was not an option.  I had been in the home-building industry since 1965, the year I was discharged from the Army.  I reasoned it was time for a change.  I had always wanted to be an artist, so I poured myself into crafting cowboy furniture.  I bought some shop tools, including a table saw, band saw, and compressor.  Every hour I was not at the bank I was making furniture in my garage. 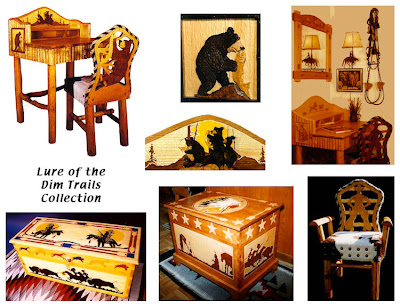 I chose "Lure of the Dim Trails" as the marketing name for my work and started a promotional campaign.  I sent photos of my art to magazines, and I started contacting retail businesses to find an outlet for my work.  By February 1992, I no longer worked for the bank, Home Magazine came out with an eight-page story about my art, the Gene Autry museum gave me a weekend show in their store, I had been included in Elizabeth Clair Flood's book Cowboy High Style: Thomas Molesworth to the New West, and I was a full-time artist creating cowboy chic furniture. 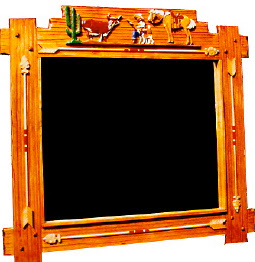 Since 1989, my art has been featured in such well-known publications as Southwest Art, Western Horseman, Country Living, Sunset, The Los Angeles Times Sunday Magazine, Home Magazine, Yippy Yi Yea Magazine, and in the 1994 cover of Country Sampler's WEST. 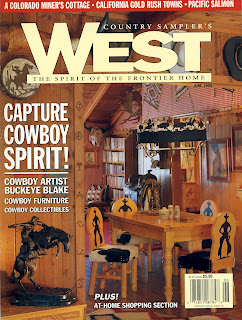 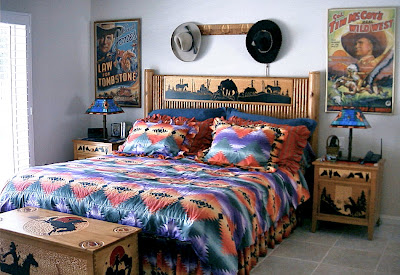 During the next decade I created hundreds of pieces  and shipped them to at least 32 states and five foreign countries.  By 2002, the cowboy high style fad was dwindling, and I found myself seriously involved in the San Fernando Valley's effort to secede from Los Angeles.  Given my obsessive personality, I've never been good at juggling more than one thing at a time, so it was time to move on to new pastures.
For more of my folk art see the YouTube video http://www.youtube.com/watch?v=fAQQBNwyig4
Afterword -- almost a decade later...
I closed the door on Lure of the Dim Trails in 2002 and became a community activist fighting to protect horse-keeping in Chatsworth.  I ran for Valley City Council during the Valley's attempt to secede from Los Angeles.  When secession failed, I joined the newly-formed Chatsworth Neighborhood Council and formed an equestrian committee and created the Chatsworth Day of the Horse.  I left the neighborhood council in 2007, and spent the next three years writing two books about Chatsworth's movie location history.  Today I lecture and sell my books at various community events.  To learn more please visit http://www.cowboyup.com/
Posted by Drifting Cowboy at 8:19 AM