At age 7 Marcus was without a father

What happened to James L. Pierce has never been determined.  Did he die, divorce or abandon his wife and children?  When the Federal census was taken in 1850, Marcus, his mother Elvira, and two sisters (Mary and Ellen) were living in the household of William Cory.

At age 20 Marcus was a soldier in the Civil War

Marcus enlisted in the Union Army on Sept. 8, 1862, and served as a Corporal with Company E, New York 109th Infantry Regiment.  He mustered out on June 4, 1865, in Washington D.C.  At the time of enlistment he was described as five feet ten inches high, light complexion, blue eyes, brown hair, and by occupation when enrolled, a painter.

Marcus and Amanda had three children:

At age 31 Marcus had lost his wife and two children

Amanda died September 13, 1873, in Philadelphia, Pennsylvania as a result of complications associated with the birth of her last child.

About 1875 Marcus was a policeman with the city of Providence, Rhode Island.

Marcus and Anna had two children:

Marcus was in poor health about 1878 or 1879 when a doctor advised him to seek higher altitude and a dryer climate.  Family members have speculated that lead paints and spirits used when he was a painter caused health problems, but the record shows he died of "consumption," the name for tuberculosis at the time.  I'm inclined to believe tuberculosis may have plagued his family from the beginning. 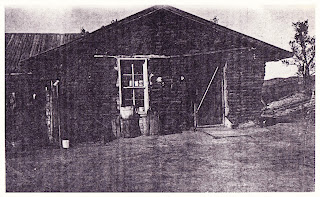 Marcus and Anna built the sod house in the photo above. Conditions of pioneer life were harsh.  They gathered buffalo chips for fuel, dug a well for water, and Marcus hunted game with an 1837 US Springfield muzzle-loading rifle he brought with him.

Marcus' health did not improve and he died December 6, 1882 in Liberty Twp, Nebraska.  Anna raised two children on the homestead.  Eventually she married William Harrison Moses.  Together they enjoyed a long and prosperous life.