In an earlier post I introduced you to Jackson Bailey and his wife Lillian.  See http://a-drifting-cowboy.blogspot.com/2011/10/cowboy-legacy-nebraska-1869-to-idaho.html
In this post we'll examine the twenty-five years he lived in Kendrick, Idaho between 1903, when he first homesteaded there, and 1928 when he retired on a small five acre plot in Lewiston, Idaho. 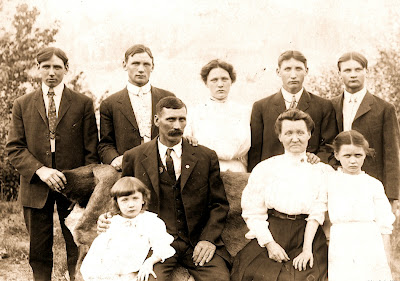 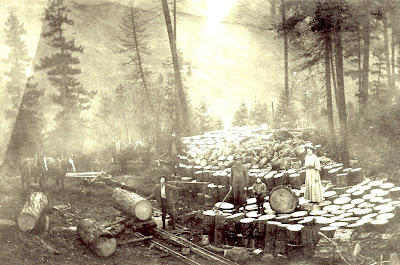 I don't know if Jackson was engaged in the firewood business, the way his son Frank had been in Kalispell, Montana about 1914, or if this 1920s photo is just a glimpse at a family operation.  Either way he had a pretty sophisticated rail system to move logs, so they could use a two-man crosscut saw to cut them.  I'd bet my bottom dollar those draft horses are Belgians. 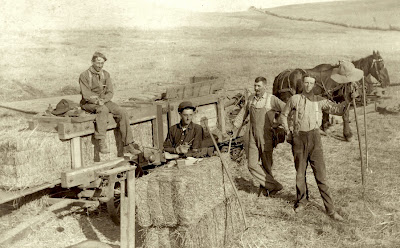 Here's another great 1920s photo of Jackson and his sons baling hay.  They forked the hay into a trough, then swung the horses in an arc pulling a piston drive mechanism that compressed the hay bale.  Granddad is on the far left.  Jackson is second from the right.  I'm not sure, but I think the other boys might be David, and George. 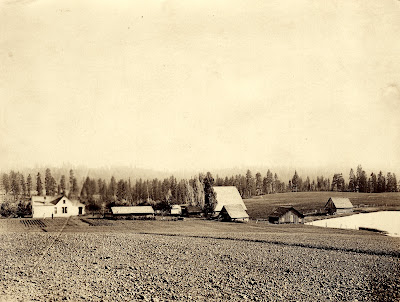 This final photo from the 1920s gives us a good view of a major portion of the 160 acre Kendrick homestead.  Jackson lived until 1949, and I don't believe he ever owned an automobile.  My uncle Vernon told me he could remember his granddad (Jackson) coming for a visit.  He said, "You could always spot him on a distant ridge where he'd dismount, and walk his horse to cool him off, and he always had one or two of his dogs trailing' behind."
Posted by Drifting Cowboy at 2:38 PM