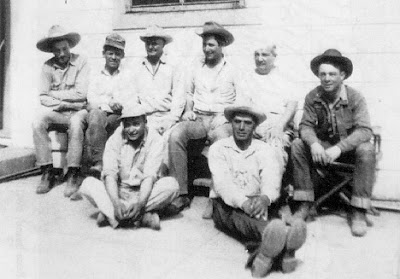 My friend Roger Miller (far left) had worked as a cowboy on Santa Rosa Island back about 1956.  Later in the early 1960s, he worked on Rancho California near Temecula.  Roger thought the most beautiful animal in the world was a new-born calf.  I sure learned a lot about horses from him.
Funny thing is that most real cowboys are proud of what they do for a living, and they ain't much bothered by what other folks think.  Come to think of it I guess most waddies just naturally follow that ol'  piece of cowboy wisdom: "Don't interfere with something that ain't botherin' you none." 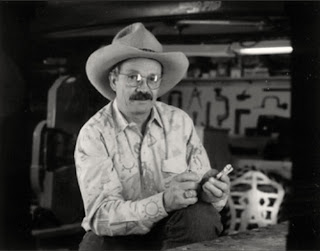 Back in 1995 I was building "cowboy furniture" and the "world wide web" was just getting' started, so it seemed to be a good idea to create a website.  Unfortunately cowboy.com was already taken, and cowboy_furniture.com seemed too long.  My wife suggested cowboyup.com which was available, so I took it.


About 1997 some outfit figured they had a better right to the name cowboyup.com, so they hired an attorney who told me I was about to get sued for using the name, and a "Molesworth" cowboy silhouette for my logo.  I guess they weren't aware of another bit of cowboy wisdom: "Keep skunks, lawyers and bankers at a distance."  That attorney really irked me, so I retained my own attorney, and documented all the books and magazine articles about my art that displayed that "Molesworth" cowboy silhouette.  That attorney had to admit his mistake, apologized to me, and paid my legal bill. 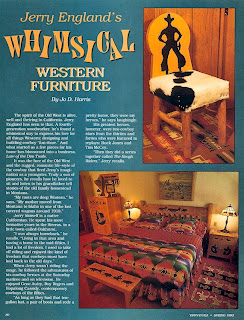 About that same time I got an email from a fellow who said he was a working cowboy and it wasn't right for me to profit from claiming to be a cowboy while he was starving to death out on the lonely prairie, his poor little wife waiting back home in the family single-wide.  No kidding, that's basically what he claimed, but it just didn't track.  I knew there was no way he was a cowboy.  How would a REAL cowboy out on the range have time to look at my website or even give a d--- for that matter.  Curious,  I "netscape-searched" his name and email address (Google didn't exist yet.  I discovered he was definitely not a real cowboy.  He was just plain nuts.
All the above raises the question: What is a Cowboy?
The Merriam-Webster Dictionary defines a cowboy (noun) as:
1 : one who tends cattle or horses; especially : a usually mounted cattle-ranch hand
2 : a rodeo performer
The American Heritage Dictionary defines a cowboy (n.) as:
1. A hired man, especially in the western United States, who tends cattle and performs many of his duties on horseback. Also called cowman, cowpoke, cowpuncher, also called regionally buckaroo, vaquero, waddy.
2. An adventurous hero.
Will James wrote, "A cowboy is man with guts and a horse."
John Wayne's comments about old-time cowboys:
They were simple, direct men.
They believed in things like liberty and minding their own business.
When the first cowboys were herding longhorns up the Chisholm Trail from Texas to Kansas, they were a pretty tough lot, but they had to be. It was a rough era in our history. There was no room for nuance or no time for luxury.
Out of the lives of these cowboys have come all sorts of stories and legends, Some true and some fiction. But the most authentic and dependable evidence of what the cowboys really were has come from the artists who pictured them in their true environment, risking their lives in stampedes, freezing or sweating, under the stars, by lonely campfires, rowdying in saloons, fighting, branding and whooping it up around the chuck wagons.
Short on cowboy credentials, but what I have I learned the hard way
So I guess if you're a genuine working cowboy, and you're annoyed by my calling myself a cowboy, I ought to give you my apology.  On the other hand, I once worked as a cowboy when I was a teenager.  I had been hired to help a young Ahwahnee, California rancher gather his cattle so he could run them through a dipping vat, vaccinate and deworm them.  That was the year I discovered I was allergic to poison oak.  It was a hot summer--most days were over 90 degrees--and where my body came in contact with my saddle, there wasn't a spot that didn't have a swollen, itchy red rash.  I spent every night sittin' in a tub full of watered-down bleach.  Later I got a series of shots and never again got a reaction to poison oak.
Scourge of the West
I am the scourge of the West,
More outrageous than the rest.
I will creep along the canyon floor
Till I come knocking at your cabin door


And to you it will be no joke
For you see my name is poison oak
© Jerry England 1999
In his book  "Cowboy Culture," David Dary wrote: "The cowboy symbolizes the free life, closely tied to the out-of-doors and Nature. The impact of land, the grass, the rivers and streams and gushing springs, the color of the sky and the clouds, the climate and the weather, these things are characteristic of the real and the mythical cowboy cultures."
Posted by Drifting Cowboy at 7:27 PM