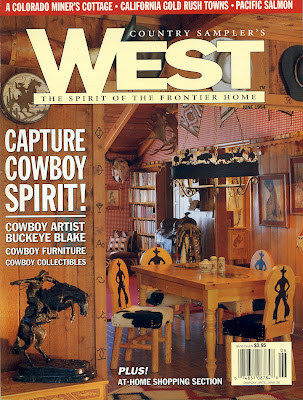 After I began "Lure of the Dim Trails" in 1989, I contacted the son of the late Thomas C. Molesworth (1890–1977) to obtain permission to use Molesworth's famous "gunfighter" design on a set of keyhole chairs I wanted to build.  I received his blessings, and also learned Molesworth actually did not create the design, but had borrowed it from an artist friend who had sketched the artwork for an airline advertisement.  My set of keyhole chairs--with Molesworth's gunfighter design--appeared on a 1994 cover of West magazine (above).

To learn more about Lure of the Dim Trails and my art see http://a-drifting-cowboy.blogspot.com/2011/11/cowboy-folk-art-lure-of-dim-trails.html 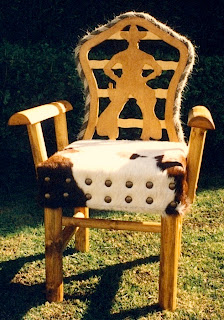 I experimented with cut-out chair backs, Molesworth called them pierced-back chairs.  The photo above is one of my gunfighter arm chairs.  Each of my chairs was hand-crafted--one at a time--and took several days to build.  Prices from a decade ago ranged from $600 and up. Construction materials included sugar pine, lodgepole pine, and birch veneer marine-grade plywood.  The seats were covered with genuine cowhide, and the chair backs were trimmed with horsehair mecate rope. 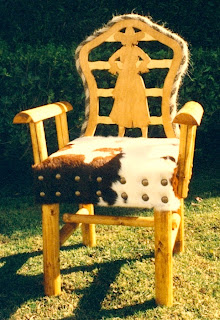 Over time I created many variations of pierced-back chairs, including the cowgirl chair (above). 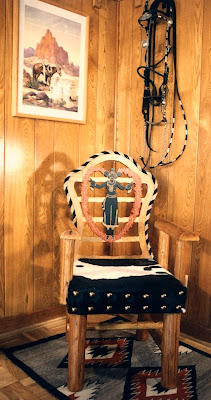 Next came the cowboy's sweetheart chair with a heart-shaped wreath of red roses (above). 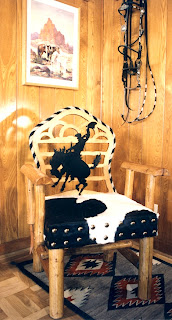 When I designed this bucking bronco chair (above) I added half circles representing clouds to help brace the chair back. 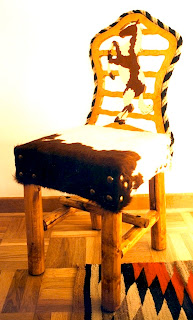 After designing chairs with cowboys and cowgirls it didn't take long before I added horses like the rearing paint above. 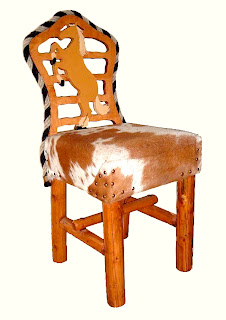 I think my favorite horse chair is the rearing palomino above.  Do you think my palomino horse Sunup might have been the inspiration?  Let me know if these photos are of interest to you.  I'm no longer building furniture, but I'm thinking about adding some "how to" pages with shop drawings and dimensions for a few pieces of my furniture.

To see a YouTube video of my folk art go to http://www.youtube.com/watch?v=fAQQBNwyig4

It's always nice to hear from old friends. A gentleman bought several pieces of my 'cowboy chic' furniture c. 1995, and emailed me this week.

After a brief exchange he sent the following photos. I did not have a photo of these pieces, so I was happy to receive them... 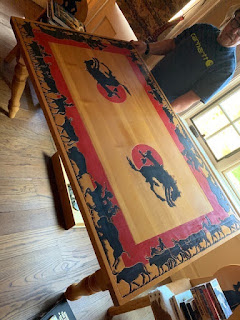 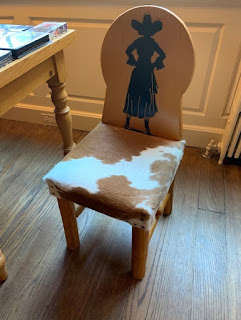 It's a small world after all.

Posted by Drifting Cowboy at 7:08 PM