Cowboy Culture -- And the soccer tribe

In the 1970s and 1980s when my kids were growing up, I became very involved in youth sports.  Looking back--nearly forty years ago--I never had more fun in my life.  Coaching kids is a lot like working with horses.  You can show a horse how to do something, but you'll do a lot better if you let the horse show you how he does it.  My motto was always "Coaching follows observation." 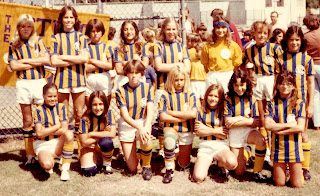 The photo above was one of my girls soccer teams--The Sting--about 1977.  Pamela, my daughter, is fourth from the left in the back row.  I cheated a little bit and recruited some of these girls from my track team.  We weren't very good, but we sure had fun. 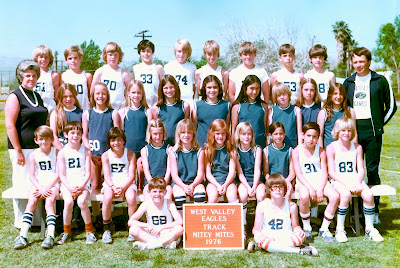 My primary sport in high school and the army was track, so coaching youth track and field was a natural for me and it's a good fit with soccer.  The photo above was my 1976 Mitey Mite team on the West Valley Eagles. 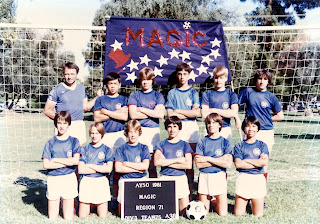 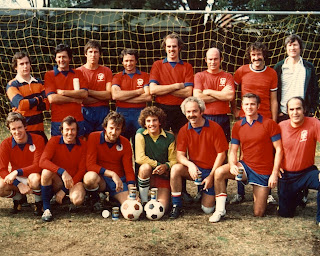 In 1975 a bunch of enthusiastic soccer dads and a few expatriate Brits formed an over 30 (years old) soccer team.  The club became known as the Woodland Hills Football Club (WHFC), but the team's nickname was the Choppers.  Within a year or two we developed a Southern California League comprised of 16 teams.  That's me fourth from the left in the back row in the photo above. 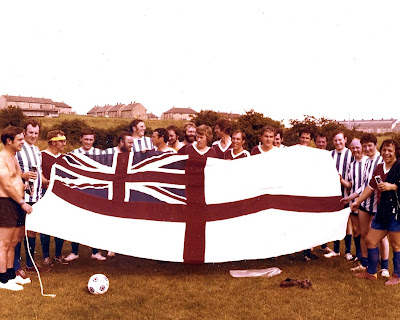 In 1978 the WHFC arranged a soccer tour of England and Scotland.  The photo above was taken on an extraordinarily beautiful pitch (soccer field) overlooking the ocean at the British Naval Base in Plymouth, England.  We played a group of naval officers (who were really a rugby team).  After we won 5 to 3, those British gentleman  (stripes) surrendered a ship's ensign to us "Yanks."  Later they treated us and our wives to s splendid evening at the officer's club.  I'm seventh from the left in the photo above. 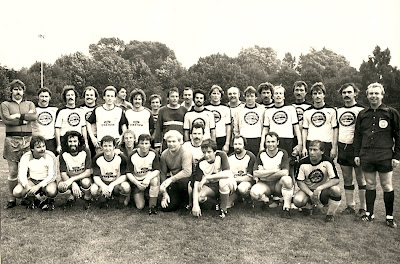 In 1981 I learned about an under16 (years old) boys soccer team from Santa Barbara, California that needed a licensed coach to chaperone them on a tour of Germany.  I signed on and spent two weeks living with three different German families.  For me the best part of the trip was playing with SV Altenessen 1912's over 30s team.  I'm second from the right in the front row of the photo above.

My two favorite television sports are still any rodeo and English Premier league soccer.
Posted by Drifting Cowboy at 7:28 AM