Learning about Blackfeet and Buffalo 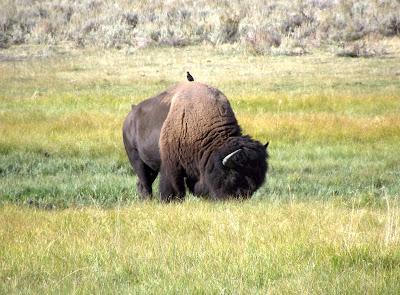 The 1980s had been a period of affluence for me and my wife.  We were both working, and we had paid vacations that allowed for some reasonable travel.  We chose the Pacific Northwest and Canada for most of our destinations.
In the late 1980s we decided to take a trip through Montana, so we could visit Yellowstone and Glacier national parks.  I had been to both a few times before because I had relatives that lived near Kalispell, where my mother had been born.
In previous years we had visited the Museum of Man in Gatineau, Quebec, Canada; the Glenbow Museum in Calgary, Alberta, Canada; and before that the Buffalo Bill Museum in Cody, Wyoming.  My thirst for knowledge of the Plains Indians culture was growing with every visit to those wonderful institutions devoted to collecting artifacts and the preservation of the culture, manners, and traditions of our Plains Indian tribes.
It was also about that time that I discovered three authors, whose personal contact with the Blackfeet tribe, gave them insight to write fascinating accounts of their lives, legends, culture, and mythology.
Those writers were:
George Bird Grinnell (1849 - 1938) who became a prominent early conservationist and student of Native American life.  He accompanied Lieutenant Colonel George Armstrong Custer’s 1874 Black Hills expedition as a naturalist.  Grinnell was prominent in movements to preserve wildlife and conservation in the American West. For many years, he published articles and lobbied for congressional support for the endangered American buffalo. In 1887, Grinnell was a founding member, together with Theodore Roosevelt, of the Boone and Crockett Club, dedicated to the restoration of America's wild lands.
A few of my favorite books authored by him are When Buffalo Ran, Blackfeet Indian Stories, The Fighting Cheyennes, and Trails of the Pathfinders.
Frank Bird Linderman (1869 - 1938) who was a Montana writer, politician, Native American ally and ethnographer.  Linderman moved to Montana Territory in 1885 at the age of sixteen.  At the shores of Flathead Lake, he learned Indian ways and lived as they lived. To know them better, he mastered the sign language, a feat which gained him the name "Sign-talker," and sometimes "Great Sign-talker."  From 1893 to 1897, he worked in Butte, Montana and then moved to Brandon, Montana. Around 1900, he moved to Sheridan, Montana, where he worked several jobs, one as an assayer, another as a furniture salesman, and a third for a newspaper.  He also lived in Sheridan,  Kalispell, Helena, and Butte.  Linderman served in the state Legislature as the representative from Madison County, Montana in 1903 and 1905. He served as Assistant Secretary of State from 1905-07, after moving to the new state capital of Helena in 1905.  Through his work, the Rocky Boys Indian Reservation was established by law in 1916
A few of my favorite books authored by him are On a Passing Frontier; Lige Mounts, (Free Trapper);  Plenty-Coups (Chief of the Crows); Red Mother; Beyond Law; Indian Why Stories; Indian Old-Man Stories (More Sparks from War Eagle's Lodge-Fire); Kootenai Why Stories; Old Man Coyote Stories; Montana Adventure (Recollections of Frank B. Linderman); Recollections of Charley Russell; and Wolf and the Winds
Linderman also developed a close personal friendship with the cowboy artist Charles Marion Russell.
James Willard Schultz or Apikuni, (1859 - 1947), who was a noted author, explorer, Glacier National Park guide, fur trader and historian of the Blackfoot Indians.  While operating a fur trading post at Carroll, Montana and living among the Pikuni tribe during the period 1880-82, he was given the name "Apikuni" by the Pikuni chief, Running Crane. Apikuni in Blackfoot means "Spotted Robe."  Schultz is most noted for his prolific stories about Blackfeet life and his contributions to the naming of prominent features in Glacier National Park.
A few of my favorite books authored by him include My Life as an Indian (The Story of a Red Woman and a White Man in the Lodges of the Blackfeet); With the Indians in the Rockies;  Sinopah: The Indian Boy; The Quest of the Fish-dog Skin; On The Warpath; Apauk-Caller of Buffalo; Rising Wolf--The White Blackfeet (Hugh Monroe's Story of his first year on the plains); Bird Woman (Sacajewa--The Guide of Lewis and Clark); Seizer of Eagles; Trail of the Spanish Horse; Running Eagle--The Warrior Girl; Dreadful River Cave; The War-Trail Fort--Further Adventures of Thomas Fox; and Pitamakan.
Over many years I collected and read nearly all the of the many dozens of books authored by them.  So, if you want to learn about Plains Indian life and culture during the "buffalo days," you can find no better resources  than the books listed above.  Many of these books are now available as free downloads from Google books. 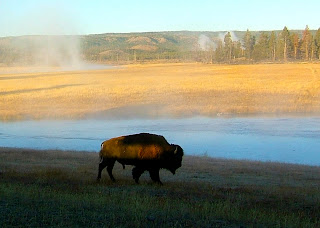 As for my wife and I we are planning another trip to Yellowstone and Glacier National Parks.
Posted by Drifting Cowboy at 10:36 AM